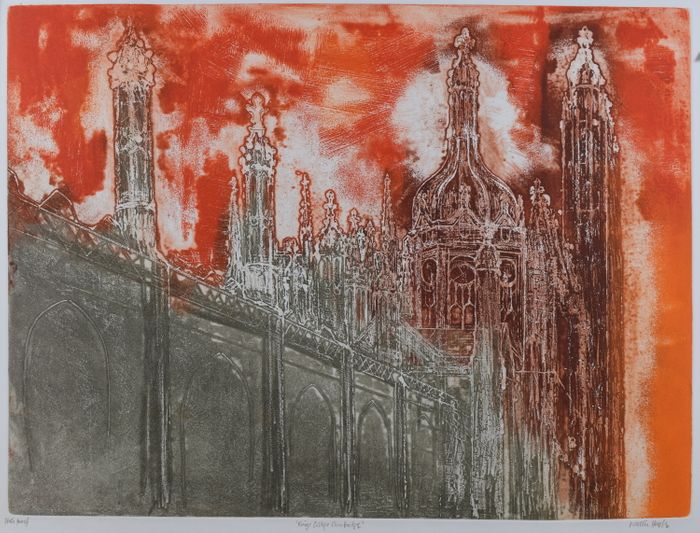 Editions Alecto commissioned Hoyle to produce ten prints in the Cambridge Series, which he cut, proofed and printed by hand on handmade Japanese paper on an Albion Press at his studio in Great Sailing in Essex. This print is not in the published series, and is possibly unique.

Hoyle trained at Beckenham School of Art and the Royal College of Art. At the latter he was strongly influenced by Edward Bawden, one of Britain’s greatest linocut printers. Bawden had been commissioned by the 1951 Festival of Britain to produce a mural for the South Bank, and chose Hoyle to assist on account of his great talent. Hoyle moved to Great Bardfield in Essex, becoming a part of the Great Bardfield group of artists of whom in the post war era probably Bawden and Kenneth Rowntree are the most famous. Diverse in style, they created figurative work – in stark contrast to the abstract work of the St Ives artists at the opposite end of the country. (If he had not died whilst on active service as a war artist, off Iceland in an air-sea rescue, Eric Ravilious would have had this accolade.) The Fry Art Gallery in Saffron Walden was established to celebrate the works of the Great Bardfield group.

Hoyle taught at St Martin’s School of Art from 1951-60, Central School of Arts and Crafts from 1960-64, and Cambridge School of Art from 1964-1985 during which time he launched Cambridge Print Editions. His work is in the collections of the Tate Gallery, Victoria & Albert Museum, The British Museum, Kettle’s Yard and the Fry Art Gallery. The Royal West of England Academy hold a large oil painting of Trinity College Cambridge. Commercial commissions came from Shell, the BBC, the Post Office, the Folio Society, Christies Contemporary Art and Editions Electo. He wrote the book “To Sicily with Edward Bawden.”