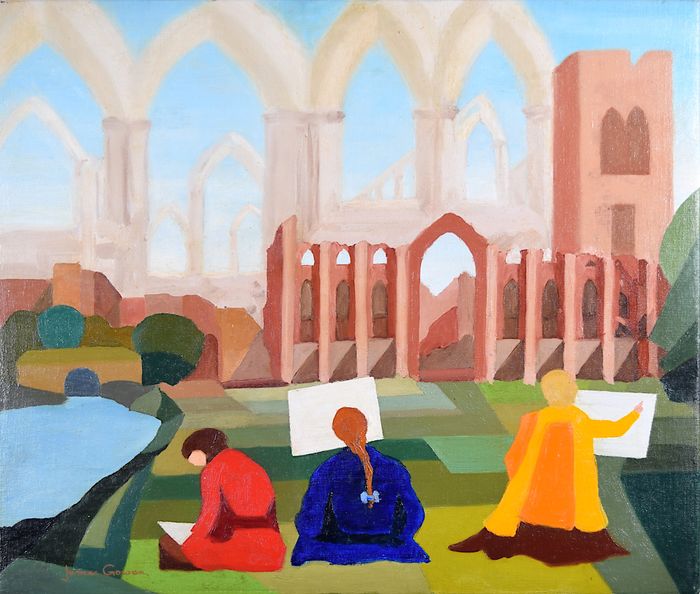 The present work exhibits many of the characteristics obvious in Gowan's architectural works. There is a very strong architectural composition. The landscape and sky are approached in almost cubist fashion, reminiscent of the Toblerone-shaped roof of the Leicester Building, whilst the figures have a carefree feel to them. And here indeed are the gothic towers and flying butresses that we know inspired Gowan when designing the Leicester Engineering Building, being captured by the brightly-dressed members of an art class, splashes of primary colour in an already colourful landscape.

Gowan studied at Glasgow School of Art and Kingston School of Architecture where he was taught by Philip Powell of Powell & Moya who subsequently employed him on the winning entry to the Skylon Competition for the Festival of Britain in 1951. Following a period working on Stevenage New Town he jointed Lyons Israel Ellis where he met James Stirling. They were quickly established as one of the most radical practices of their generation when they designed Langham House Close on Ham Common (West London) in 1958 – a reaction against all that had gone before them.

Gowan and Stirling took equal parts in the design of their early projects, culminating with the 1963 Engineering Building at the University of Leicester, considered the first postmodernist building in Britain. Shortly after the building was completed the two split acrimoniously, Stirling taking the lion’s share of the credit. The Engineering Building represented a violemtn shift from the postwar era’s functionalist doctrines, bringing in forceful geometries and dynamic structural feats in what was subsequently called the ‘engineering style’. Two cantilevered lecture theatres are topped by a pair of glazed towers, clad in red Dutch tiles, monolithic wedges inspired by the superstructure of an aircraft carrier; the workshop building is surmounted by a crystalline roof with rippling waves that let in north-facing light. An almost gothic feel to the design, with concrete columns supporting the building like mediaeval flying buttresses, was later described by Gowan as “the Picasso profile with teh big eye slapped on the front” The visually stunning and highly practical building caused the architects to be awarded the Reynolds Award from the American Institute of Architects and was Grade II* listed in 1993.

Stirling had fallen in love with the style and redelpoiyed it in his History Faculty Library at Cambridge University against Gowan’s protestations. In his 2008 biography he said “I haven’t changed my opinion that [the History Faculty Library] is a most unlikely college library and repeating the aesthetics [from Leicester] was most unwise.” It has never been popular, overheating in summer and leaking in winter. Disagreement over this building caused the seven-year long partnership to break up. Stirling got his way in Cambridge, and with the Florey Building in Oxford followed by many more significant projects. Without Stirling’s flamboyant personality Gowan’s skill was never allowed to flourish.

It was as a teacher that Gowan really excelled, influencing Quinlan Terry Richard Rogers, Peter Cook of Archigram and many others. His little-known speculative  projects expressed his playful side. In the 1970s he produced ideas for enormous bird buildings, fat pigs, a giraffe-shaped skyscraper for Greenwich Reach with legs in the tidal Thames.