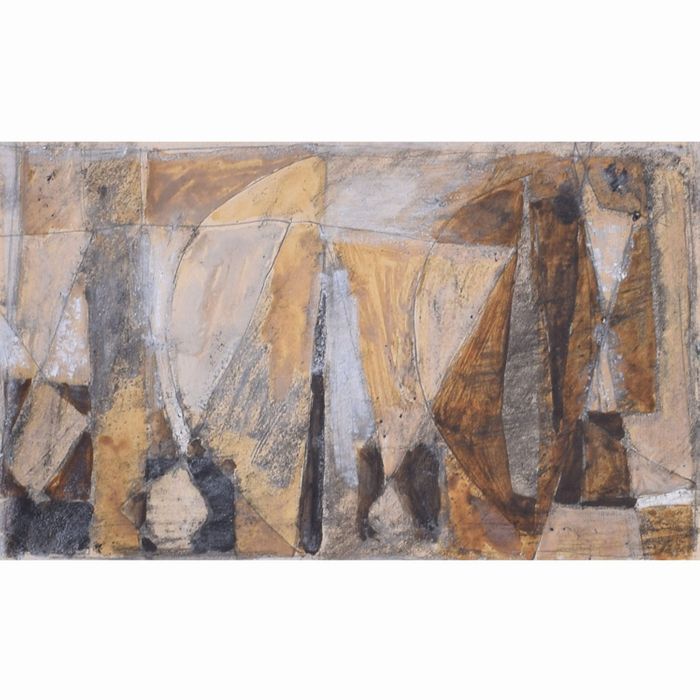 Provenance: the family of the artist, by descent.

Born in Bognor in Sussex and trained at St Martin’s School of Art and Regent Street Polytechnic, Ellis was a graphic artist and illustrator who is best known for the posters he produced for London Transport during the 1930s. He generally collaborated with his wife Rosemary – whom he married in 1931 – on their posters. The General Post Office, Shell, and The Empire Marketing Board were also clients for their posters. They signed their posters C&RE, their initials being in alphabetical order and they are readily recognisable by their ebullient use of colour and form.

Employed during the war as a camoufleur, along with so many other artists, Clifford was also an official war artist, serving with the Grenadier Guards. Rosemary, meanwhile, was an artist for the Recording Britain project.

Following the war they trained art teachers at Bath Academy of Art. They also designed a series of nearly one hundred book jackets for Collins New Naturalist series, published between 1945 and 1982.

Running an art college, Ellis did not want to train artists who then ended up as teachers because they could not find work as artists. Instead he sought to train them as art teachers which gave them an alternative if they failed to make it as artists. Bath was staffed with artists who are household names today. Upon the outbreak of war, William Scott returned to England from France and sought employment from Ellis, being given a part-time job. After serving in the Royal Engineers he returned to the staff in 1946.

Kenneth Armitage, (who ended the war as a Major having specialised in recognition of tanks, aircraft and other machines of war – which he regarded as fitting neatly with his interest in sculpture) took on teaching sculpture from 1946 – William Turnbull standing in for him whilst he taught for a few months. Early in the 1950s, Scott suggested Peter Lanyon, Bryan Wynter and Terry Frost be approached to teach and Ellis gave them part-time roles, two or three days per week, or six-week blocks of teaching. Amongst other household names feature Robyn Denny, Gillian Ayres, and Adrian Heath.

The influences of some of these artists may be seen in the abstract paintings, although a common thread – Ellis’s hand – ties the works together, some of Scott may perhaps be seen in the spotty works and Lanyon perhaps in the Collages. The Sailing Boats are interesting, as – turned on their side – they look very much like a Terry Frost ‘Walk Along A Quay’ yet the sketches make it quite clear which way round they were to be. Meanwhile the landscape works with clearly defined patchworks are strangely reminiscent of Adrian Heath’s works of the late 1950s and early 1960s.